…is restoration ecology as farm practice

… ‘Restoration Ecology’ in practice as a method of farming food and water for all people, plants and animals together, while simultaneously restoring the land and water system as a living ecosystem, even if the land has lost species diversity, vegetation density and stability of climate.

… Stewardship of self-organising land and water systems. Nature is our servant if we are Nature’s steward.

… simultaneously regenerating the land and water system at scale while farming, for the benefit of the whole biological community including people.

…  reconnecting the natural cycles that Nature has created to re-soil, re-hydrate and re-vegetating whole of valley land surfaces where people live, too.

… developing learning centres throughout Australia where we establish short term partnerships and apprenticeships on our land or on other landholders land.

As rural Australia is suffering yet another crippling drought, people everywhere should be asking these two questions: where did we go so wrong? And what can be done about it now?

At the present time in Australia our leaders ‘know not what they do’, people are dispossessed of resources, our people-built urban and rural communities are in turmoil over the ‘haves and have nots’, land values are unstable, most major banks have left rural areas, business confidence is as erratic as the climate. Also urban and rural industries are defunct, regional rail lines are closed down, water and sewage systems are chaotic, industrial grain storages are no longer in use or sold off, regional abattoirs are going broke, most flour mills are long gone, only large regional stock sale yards are now still in operation. There are large areas of our farm lands that are vegetation bare and no longer retain soil, animals, plants and water. Our farmlands yield less each year and many hectares are gully and sheet eroded, our streams and river valleys are highly degraded, polluted and dysfunctional and there is less available water in every region. People are building fire prone houses in fire prone areas and flood prone houses in flood prone areas in a land of droughts, fire and flooding rains. Even most of our young rural populations of people are migrating to the cities, with larger welfare budgets.

This is symptomatic of desertification of once resource abundant grasslands and forests where multiple species of microbes, plants, animals and people have been replaced by monocultures of single dominant species due to inappropriate land use methods and a complete lack of ecological understanding.

All Australians need to study the history of land use in Australia so as not to repeat expanding the desert where we each live.

Urban and Rural Australia is dying!

As with all desert areas where people live, vegetation bare surfaces, urban and rural, radiate unused sunlight as accumulated heat to the atmosphere all day and all night. This warms the regions where people live! 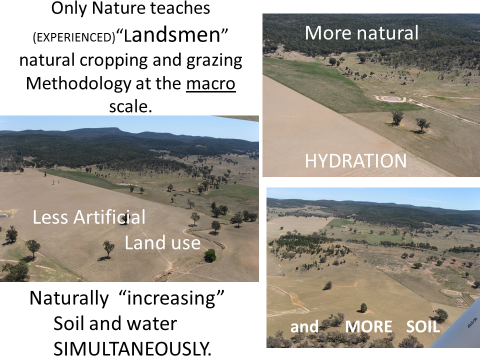 Conversely densely vegetated green leaf surfaces, shade the earth to cool it and absorb sunlight energy to photosynthesize and simultaneously transpire water vapour to the atmosphere to cool it, while ever the sun shines.

Along with evaporation from oceans, green leaf shading and transpiration combined, are the ‘air conditioning’ system for our planet.

This is regional desertification on a national scale manifesting as a slow decline in landscape function, loss of ‘bio-diversity’, loss of vegetation density, loss of wild life and domestic species numbers, loss of top soil, and loss of in ground water holding capacity, all of which is the production base of rural Australia. Decline of landscape function in turn has induced an erratic climate that also increases the seriousness and length of repetitive drought and wind storms of dust.

What does this mean for our future Australian generations?

Well it means we are not able to sustain our health, wealth and population of all living species in Australia, including people. Neither our laws, our governments, our people, our institutions, nor Royal Commissions have been able to reverse nor even slow down this continuous decline in regional Australia, so is it easy to start feeling hopeless. But the ecological understanding now known as “LANDSMANSHIP” gives hope.

Now, imagine a large area of Australian rural land that was first taken up by shepherd squatters in the early 1800’s, as the first sheep station in the region. This land, once abundant as a valley wetland grassy forest that supported all wild life and sheep flocks of thousands has now become a mainly barren, dry, gravel and dust covered valley.

This country for over a period of one hundred and fifty years has become highly industrialised by applied man made technology and human-logic. Where all natural resources have been exported off the land to earn money. Where soil, water, grass and forests have all been depleted and erosion, drought and food shortages are now causing famine for all the declining population of plants, animals and people who live there as habitat.

Imagine now also if you will, that a portion of that same land was managed quite differently so that only the natural ecology was applied for the last ten years, where all natural resources were increased and retained on the land as ecological capital, where soil, water, grass and forests have been regenerated and accumulated at whole of landscape scale. Where also the same regular drought conditions did not impact to the same degree and most large grazing animals moved regularly to other areas and back again to graze after a long term rest/seeding down/growth period and people had plenty of shared resources as water and food growing perennial vegetation food crops, milk, meat and eggs produced from intensively managed small plant/animal systems and locally conserved animal and people food provided by “Habitat in Common”, until the rains came again to re-hydrate and re-produce from more functional land again abundantly, in this Australian land of regular droughts and flooding rains.

This is where Landsmanship comes in!

Life of Study and Research Ecology

A whole of lifetime study and research into natural phenomena (Nature working) has led one Australian scientist and passionate farmer Paul Newell to master the multi disciplines of Agrarian Science (The Science of rural land and the long term living methods and skills of the people who live as rural communities) as well as the art of reversing desertification into a flourishing and productive land and water system (ecosystem) once again. Nature is able to ‘self-repair’ if people know how to apply Nature’s own living ‘eco-structure’ creating ecology, rather than applying man made inert infrastructure developing technology.

“LANDSMANSHIP” is Stewardship of self-organising land and water systems. Nature is our servant if we are Nature’s steward.

At scale Nature is a better farmer

Farming naturally has no need to use man made fertilizer, herbicide, insecticide or fungicide or man made patented GMO verities of plants and intensively bred stud animals to increase yields in cropping and grazing. Farming naturally is FREE farming and only produces chemical free and grass fed sources of food and fibre from their own locally selected seed stocks in functional whole of valley landscapes.

It is this ability to ‘self-resource’ in functional ecosystems that is the challenge for Western culture in our modern day world. Where money needs only to be regarded as currency, not wealth, where land-share and partnership principles apply, where primary production is grown and used locally and profitably, without industrial processing, where local people make everything they need from local sources, including their own comfortable accommodation in and from the earth. Also where rural people produce their own energy, habitat and education from their own local resources and no money is spent on imported in-put to the common functional local healthy ecosystem. 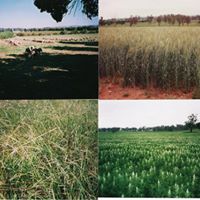